Book – “Stuffocation : How We’ve Had Enough of Stuff and Why You Need Experience” – James Wallman

This was one of my holiday reading titles. I chose it because I’m getting interested in the idea of minimalism and really looking beyond the collecting of stuff. So this looked like the ideal volume to get stuck into during the holidays.

The author’s credentials are that he is a discerner of trends and does so for large corporations. He applies his skill in this to seeing where the western world (and by extension the rest of the world as the catch up) is going.

Stuffocation, he defines, is the mental and physical price paid by people for over consumption. The roots of which can be dated back to the early 20th century where US factories were producing more goods than people wanted. Thus, the book tells us, the captains of industry got together with the advertising sector and persuaded people to buy buy buy. And in the process we created the throwaway consumer culture that we see today.

The problem, he goes on to tell us, is that we became very good at overconsumption. Houses are stuffed with things and we’re paying ever more for larger property to hold it or storage facilities to keep the stuff we can’t bear to part with.

It also drives us in our jobs to work longer hours just buy more stuff. In short, we’re keeping up with the Jones’ but killing ourselves in the process.

So the author examines the three possibilities for getting out of the trap. First up is minimalism. He tells some stories of people who have downsized and possibly taken it to extremes such as the family that gave it all up to live in a cabin in the middle of nowhere.

The second idea presented is what has become known as Medium Chill. If minimalism is stepping on the brakes, Medium Chill is taking the foot off the accelerator and slowing down. The idea is to work just hard enough to be comfortable, consume what is necessary and spend time doing things that are enjoyable. Basically just to relax.

Third up and his suggestion for the future is the experience economy. This is where resources are spent on experiences rather than on things. The theory goes that experiences last longer in the mind and are more enriching than physical goods.

The problem with the experience economy is one that the author himself brings up in the book, namely social media. We use good such as cars and houses as a way of displaying our status. With physical goods, this is only to our immediate peers such as neighbours and friends. With social media such as Facebook, we have the opportunity to do the same with experiences and to reach a wider audience. The endless parades of status updates about what people are doing have even produced a new anxiety, Fear Of Missing Out (FOMO). It would appear than in beginning to embrace the experience economy, we’ve exchanged one competition and set of problems for another.

For me, the stand out idea in the book was Medium Chill. Having the ability to take the foot of the accelerator and live a happy and content life consuming as required but living within our means and doing what is important seems right and simple. And it led nicely onto the other book that I brought on holiday, a book on the Stoic philosophy of Ancient Greece and Rome.

Time for the summer holiday and this year I was heading south. Not necessarily in search of sun but for some relaxation and to see the sights.

So on Monday the 7th, I hit the road about 9:30am in glorious sunshine and headed for the A1 south with a quick pit stop for food at Cameron Toll and for fuel at ASDA Dunbar. The A1 is a road I have driven on a number of occasions and it has never endeared itself to me. Alternating single and dual carriageways for most of the length in Scotland and northern England means that it is possible to get stuck behind something for some distance. Add to that, this year, they decided to add some road works into the mix.

But nevertheless, I made it to the first site at Knaresborough. And in a fit of excellent timing, I missed the Tour De France by one day. Probably for the best, most of the roads were shut. Pitched up and got the awning in place with only a little swearing. The sun was still shining and I was “glowing” with the effort of putting the awning up so I hit the showers (up to the usual Caravan Club standard) and settled down for the night with an episode of Shetland. Very good but feature length which I hadn’t realised. 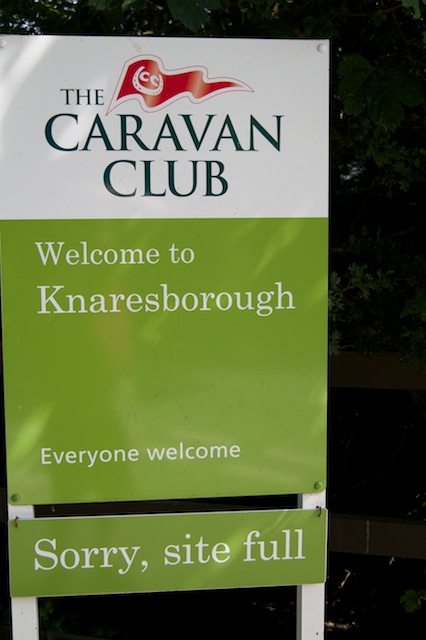 Woke the next morning having had an ok night because, as is traditional, I’d forgotten something. And in this case it was a pillow. Still, was up early and after breakfast, hit the road for my first day trip of the holiday. The Knaresborough site is a little outside the town, about half an hour’s walk away. Knaresborough itself is close to Harrogate and sits on the train line between Leeds and York. It was to York that I was heading and was quite impressed when a class 150 DMU pulled up. I thought they had been put out to pasture a while ago. But it was a comfortable and reasonably quick trip to the massive station at York.

The first port of call of any trip to York has to be the National Railway Museum. I got there for it opening and spent an hour geeking out looking at the trains and other railway items. The Deltic was hidden in the corner but there was a new and rather splendid looking steam loco along with the Mallard. 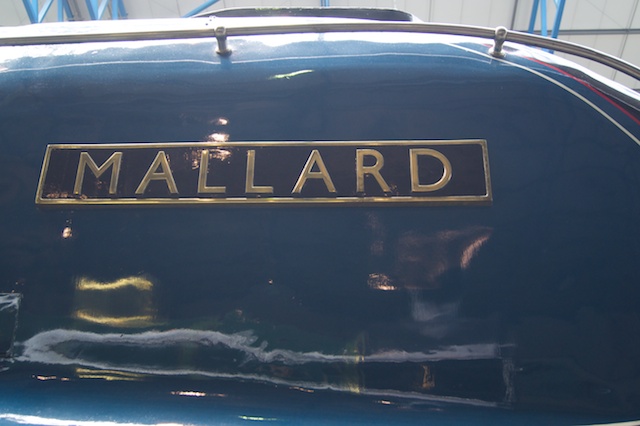 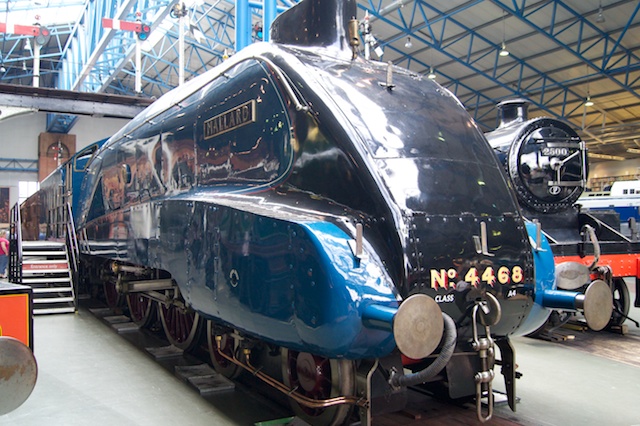 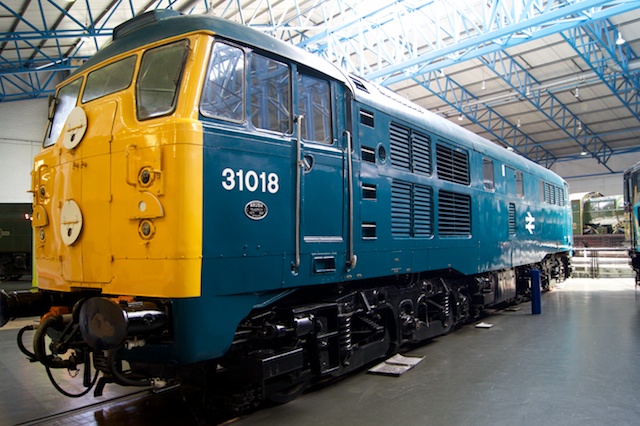 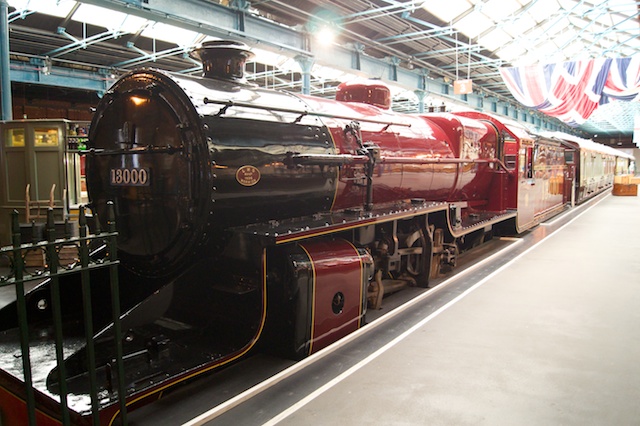 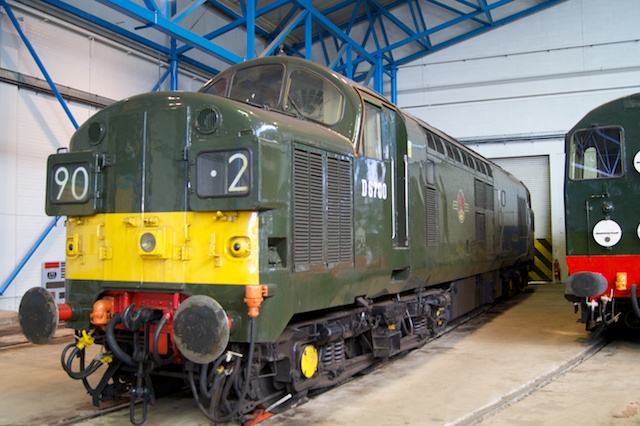 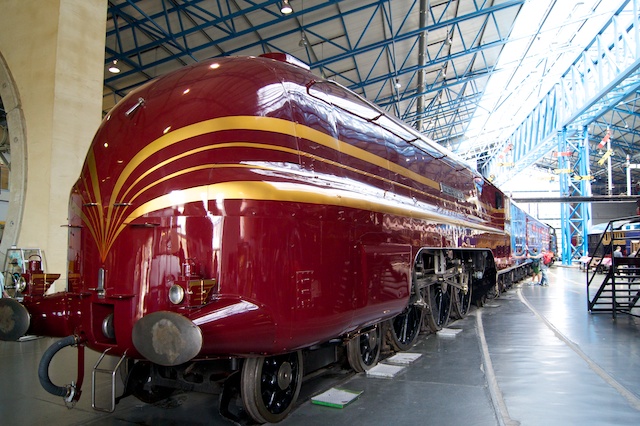 After the museum, the next port of call was to be York’s cold war bunker. However, I misread the opening hours and got there to discover it was only open at the weekends. I got bus back into town and the next thing on any list of sites to see in York, The Minster. Decided to forego the guided tour and the climb to the top of the tower and spent the time instead marvelling at the stained glass windows. They are currently in the middle of a multi-year restoration of the large window at one end of the minster and there was a fascinating display on the work that they are doing. It will be worth going back to see when complete. 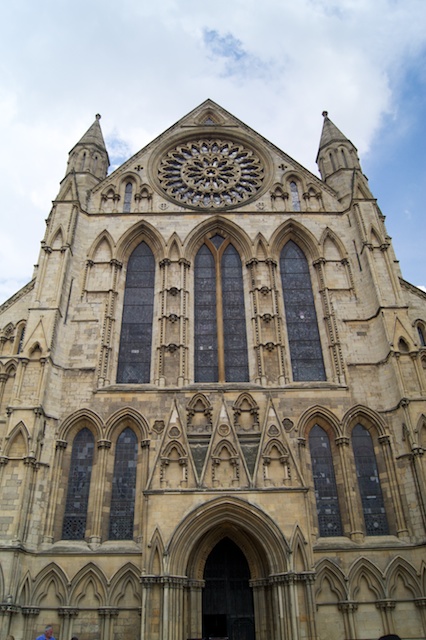 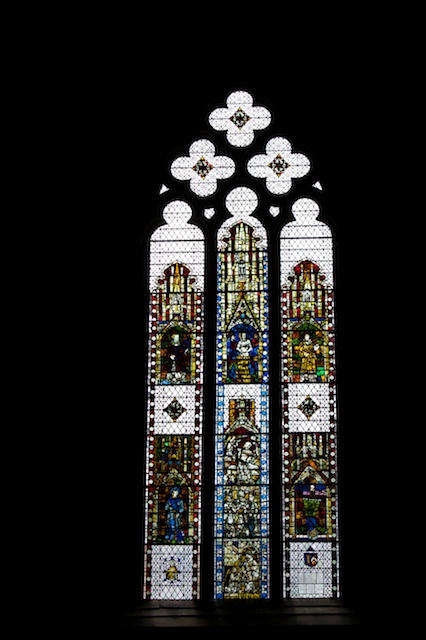 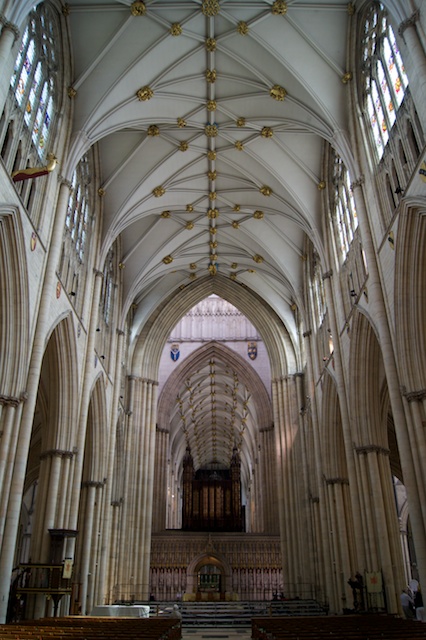 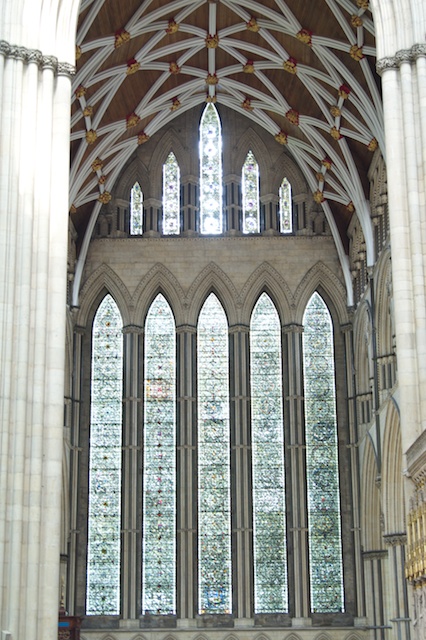 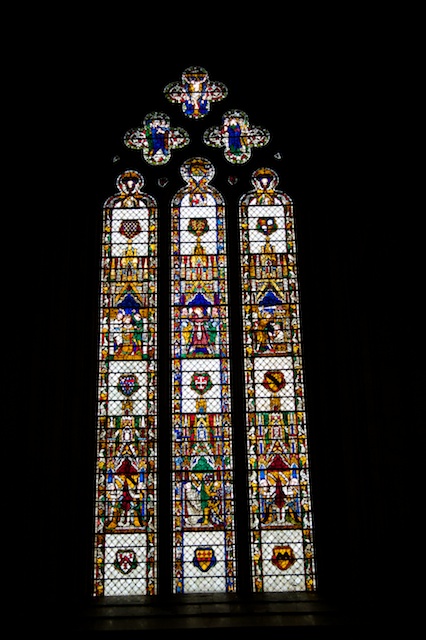 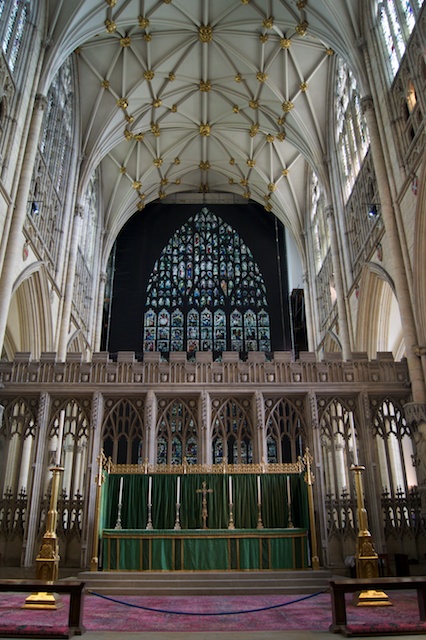 There wasn’t really anything else I wanted to see so it was back to the station and back to the Van. There was a cloudburst on the way back with one of those rainstorms that lasts 30 minutes then the sun comes back out and turns the place into a sauna for an hour or so.

Wednesday the 9th dawned early; one of the problems with the van is that the curtains do next to no job of keeping out light. It was back to the station and heading in the other direction, to Leeds. The main goal of going to Leeds was to see the Royal Armouries. On the ground floor they have some WWI and WWII weapons that have been converted to simulate target practise (presumably they fire lasers at the screen showing the target). I had a go on the 303 and found that I was a 2nd class shot. In to the museum proper, there was a display on jousting. 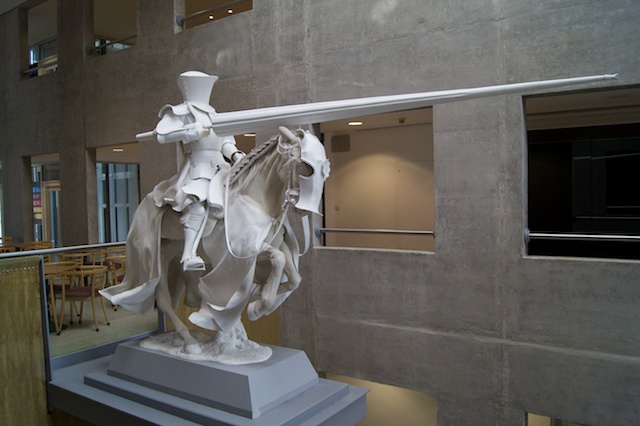 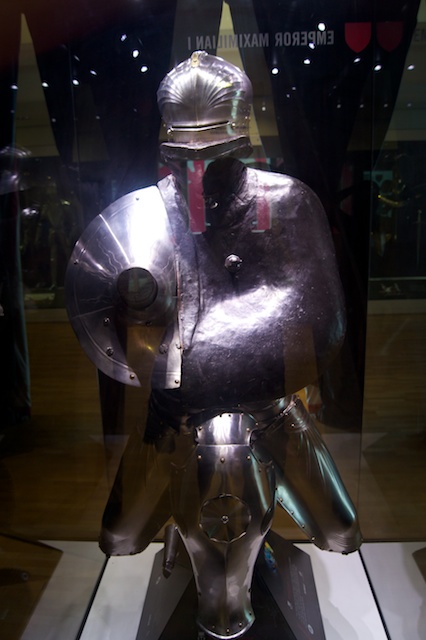 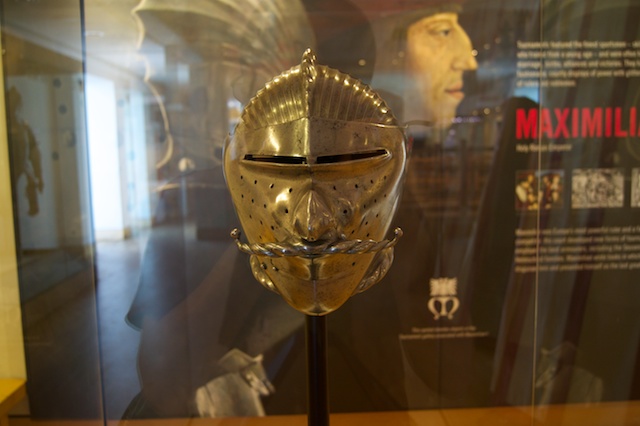 The armour was looking very good and then there was something unexpected but very welcome. A display of replicas of the weapons used in the Lord of the Rings and Hobbit movies. Good to see the swords up close, the detail that goes into them is amazing. 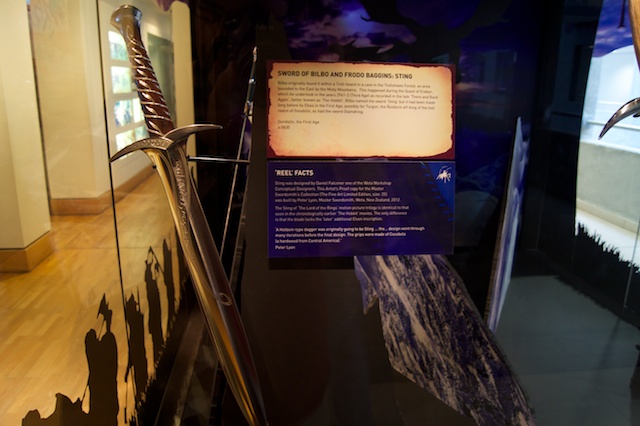 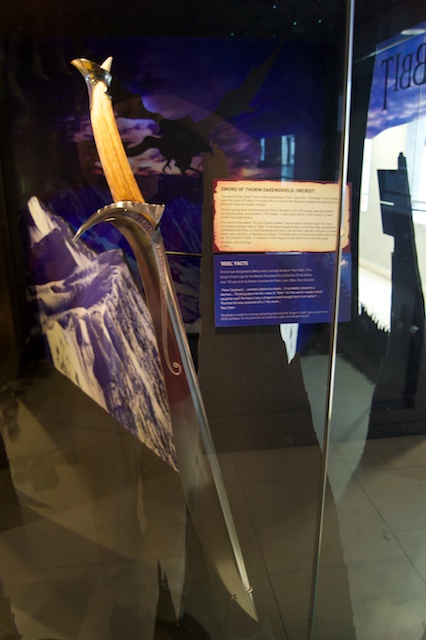 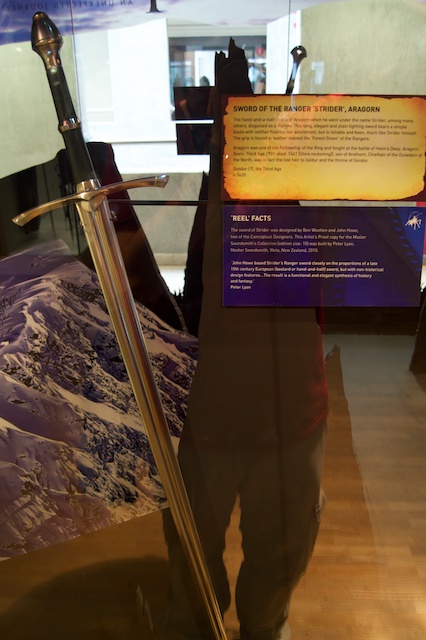 The timeline of the displays showed how warfare has changed over the years with armour and lances being replaced by guns and castles being rendered obsolete. 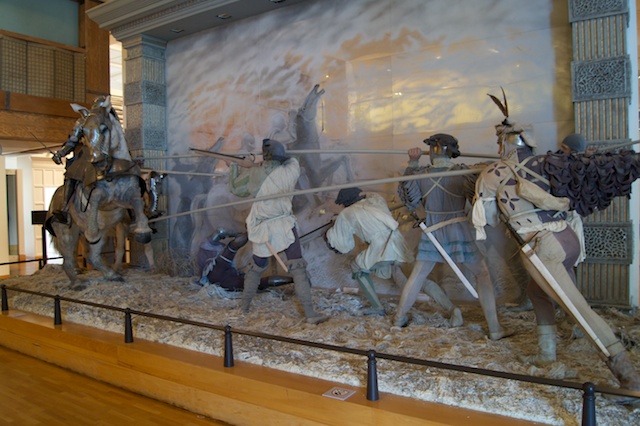 The centre of Leeds is a large shopping area. I wandered around looking in various shops till I found a Lego shop in one of the malls. Since it was my birthday, I treated myself to a Lego Mindstorms set. More wandering then it was time to head back to the train. Leeds station is huge, possibly bigger than York’s. Back at the van, I spent the afternoon reading. I usually bring along a few books to get my teeth into while I away and my Nook ebook reader is perfect for it. I finished the book Stuffocation (more on that in another blog post).

After dinner and another episode of Shetland, it was bed time.

Thursday, I decided to spend the day in Knaresborough itself. There is a castle and museum. The remaining castle itself is fairly small, having been largely destroyed at the end of the English civil war. The museum tells the story of life in that part of the world from its foundation. 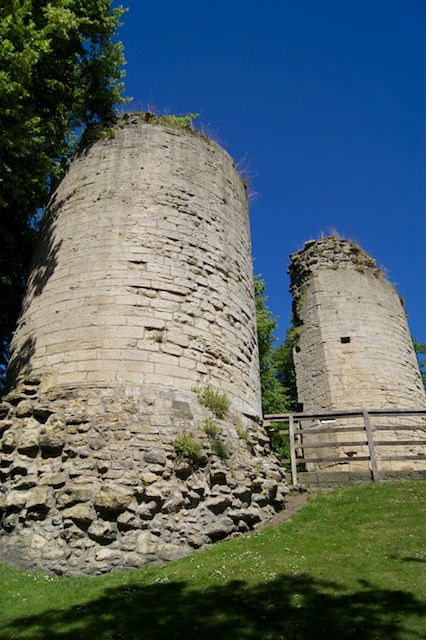 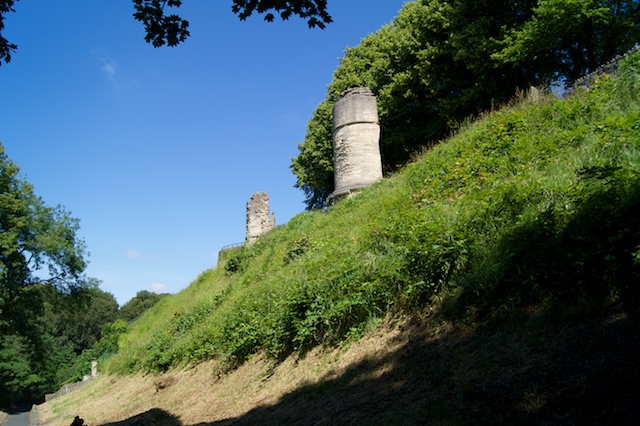 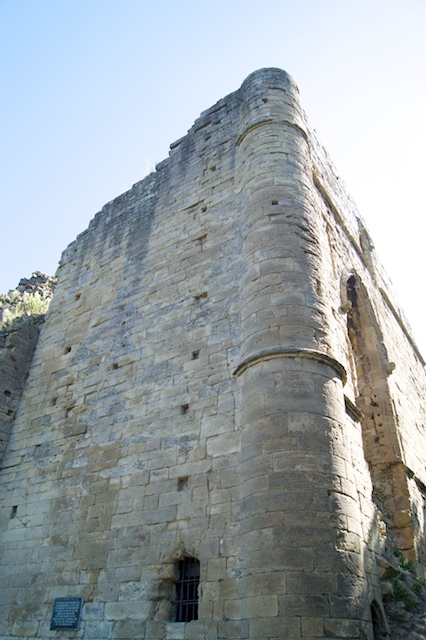 Mother Shipton’s cave is nearby but I decided to give that a miss as I’ve heard that all it is is a petrifying cave. Plus it was a bit of a hike along the road and it was getting pretty hot at this point. So I settled for a walk along the river bank to marvel at the viaduct.

Friday was moving on day and I packed up fairly lazily at Knaresborough as there was no point in hurrying. I headed for River Breamish via the Morrisons at Harrogate getting only slightly lost in the process. The traffic was heavy round Newcastle but once on the A697 it was clear and I made good time.

The River Breamish site is just past Powburn on the A697 and I arrived about 2pm. I checked in and found that the wardens had been at the Edinburgh Caravan Club site last year. We chatted for a while then I got pitched up. Decided not to erect the awning.

Saturday, I had a very lazy day, just sat basking in the sun reading. I did wander into Powburn but there wasn’t much there.

Saturday evening, I finished the last episode of Shetland and settled down. By this point, the weather was turning and the forecast rain was arriving, it started to get heavy at night.

Sunday, it was time to go home. And good timing too as the weather had turned. It was raining pretty heavily as I packed up. I hit the road, following the A697 north to the border. As I drove the weather gradually cleared till I was back in Edinburgh and in the bright sunshine.

All in all a fantastic trip. Both Leeds and York are well worth a visit and it was nice just to sit and relax. But now I’m home, I’m planning my next adventure.