They paved paradise, put up a parking lot 29MAR20

It’s only a few weeks till Easter and usually at this point I’d be cleaning the van and all the camping equipment, getting the servicing done and generally preparing for the camping season ahead. However this year all that has been put on hold due to the Coronavirus. Instead, I’m indoors most of the time, working from home and missing the things that I would normally do like walking, going dancing, visiting museums/galleries, traveling and generally being out and about.

However, here’s the thing. In a normal year, I don’t do any of those things as much as I like to imagine that I would. Especially over the past year or so, I’ve done less walking, much less dancing and traveling in the van seems to be more of a burden. There has been a considerable amount of putting off till tomorrow what could have been done today. The “I’ll do it when I have the time/inclination/energy” mindset, in the belief that there will be plenty of tomorrows to come to do all the things that I don’t want to do today.

The lockdown has put an end to the tomorrows for the time being at least. We’re in an extreme situation and it isn’t clear to me how the world will look at the end of it. There could be some positives like more working from home giving more time to do other things and cutting pollution into the bargain. On the other hand many small businesses, including campsites, could go under and there could be much less choice in future. One thing is certain, this is going to be a drastic upheaval to the world.

However, this is not to lament the current situation but to look at the past from the perspective of now. And from my current vantage point, I can see that I have wasted large amounts of time just sitting around thinking that I’ll get to it tomorrow. I would guess that many people are in the same situation right now.

Memento Mori is a powerful concept from philosophy. It tells us to remember that we are mortal and that any day we could leave this life. But we can extend idea further. It can remind us that there are always unexpected changes round the corner. The lockdown has been a massive and largely unheralded upheaval in everyone’s life. All those tomorrows have been put on hold, possibly never to come to pass.

In his essay ‘The Stoic Formula for a Happy, Meaningful Life’, William Irvine discusses the concept that when we have done something n times, we always expect that we can do it n+ 1 times. There is never the expectation that this could be the last time and therefore we are maybe not as engaged in the activity as we could have been. Instead we should consider, but now dwell on, the fact that there could be no more n, we should engage fully with the activity.

We live in a busy world, indeed being busy and rushed off your feet is considered a badge of honor. I often feel I don’t have the time to do the things I want to. The question is then, where all the time is going? The answer seems to be into the black hole that is the Internet and into perceived obligations. With movement curtailed and it possible to get sick of even the endless distraction of the Internet, now is a time to take stock of life and ask of each call on our time, “Is this really necessary?”

“When one door closes, another opens; but we often look so long and so regretfully upon the closed door that we do not see the one which has opened for us.” – Alexander Graham Bell.

The lockdown is an opportunity. There are many things that I cannot do that I wish to but there are also many things that I can do that I now have time for. This means practicing radical acceptance. This is the situation I’m in. Instead of moaning and complaining and struggling against it, look around, accept the situation and then pick up something else. I’ve long desired to write more and to write music and now I have the opportunity. Time to walk through the open door.

So my closing thought is simple. Don’t put off to tomorrow what is important to you since you never know what tomorrow brings. And remember to wash your hands properly and often.

Taken a bit of time to get going this year but it was off for the first day trip to Helensburgh and Charles Rennie Mackintosh’s Hill House. Built 1902-1904 for the Glasgow publisher Walter Blackie, this is a fine example of Mackintosh’s work. But not without its problems.

It was a somewhat driech day setting off for the 90 minute drive to the house. Luckily it was a somewhat straight journey, along the M8 then across the Erskine Bridge and finally onto the house. Good time was made and there were no arguments with the satnav, unlike Google Maps earlier which had suggested coming off the motorway in the city center of Glasgow then taking the Great Western Rd.

On parking up and approaching the house, the first thing you see is not the house itself but the shield that has been built around it. Mackintosh’s choice of building materials was innovative at the start of the 20th century but really weren’t up to the Scottish climate. Water has been getting into the fabric of the building and the house it literally dissolving away from within. So the National Trust for Scotland have built a “box” round the house which shields it from most of the bad weather and allows the building to dry out. This has the negative point that you can’t see the building situated in the landscape but does have the positive point that there are walkways round the box and you can see the house from angles you wouldn’t otherwise see. For example.

Entering and climbing up onto the walkways it was fascinating to see the house from above and to see some of the upper story details up close. The box is open to the wind and it was a little chilly so I didn’t tarry long but headed in through the side door.

The entrance hall was fantastic. Pure Rennie Mackintosh. Wood  paneling, a wonderful clock at the end and some rather good light fittings. To the right was the library. Something I’ve always desired in a house :-).

The scullery was open but set out for an event and the Mackintosh shop closed so it was on to the upper story and into the main bedroom. This was a tasteful and lovingly designed space and it always strikes me that the furniture maintains a contemporary look, to the point that you could imagine it being sold today.

With the building slowly drying out, many of the rooms on the first floor were not furnished but they did maintain some period features such as fireplaces and windows that would have been designed by Mackintosh.

After visiting the house itself, there wasn’t a chance for a turn round the gardens and the weather was closing in and the rain that had been threatening hit and was torrential. So it was back to the van and onward home. A lovely visit and well worth a trip of you’re in the area. 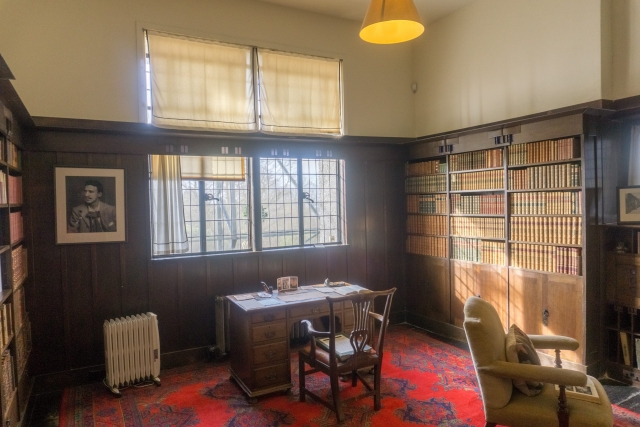 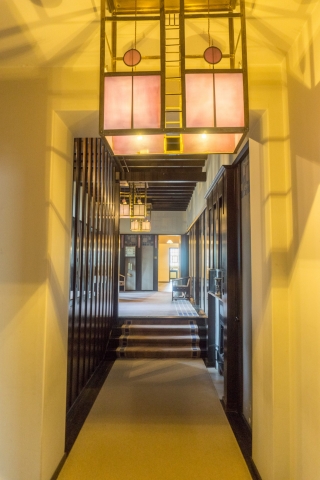 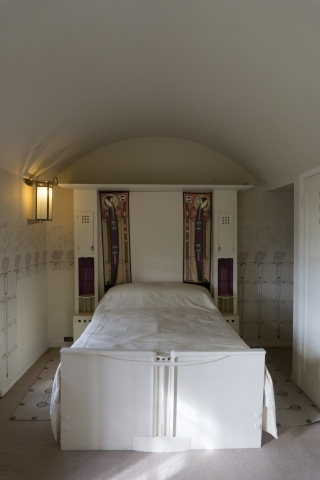 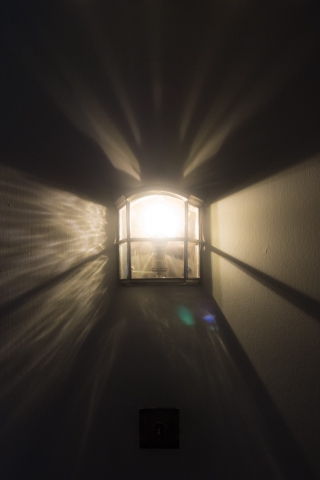 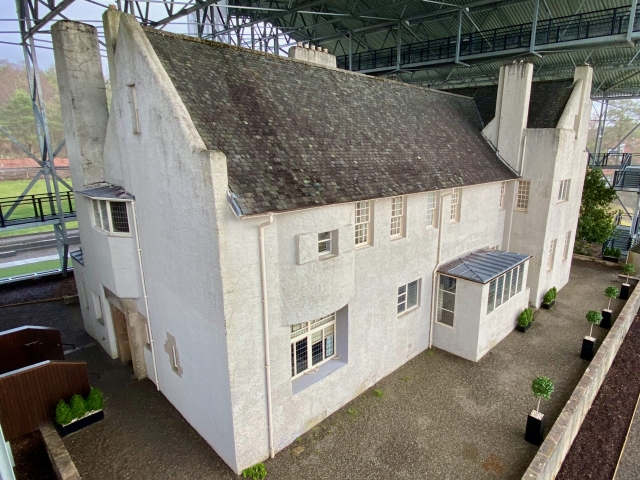 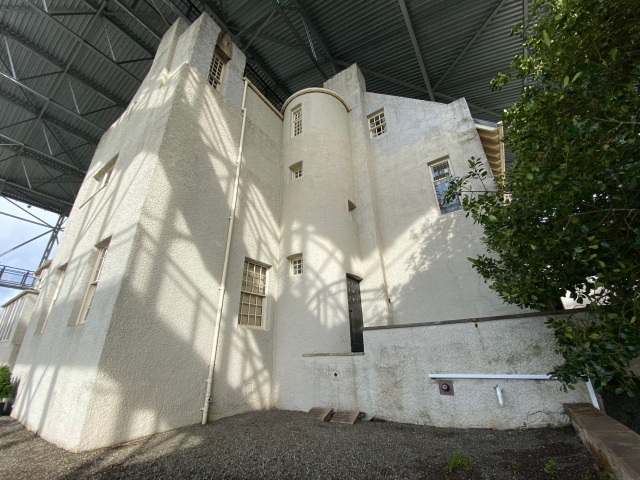 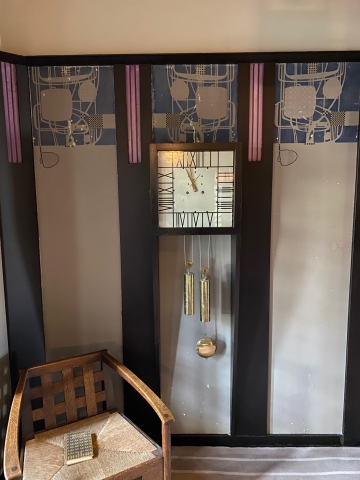