Hit the road on Friday morning heading for the Lake District for possibly the last weekend away this year. Was in the van and running at 9h45 and after the usual pit stop at Sainsburys it was onto the road south. Initially slow going on the A702 due to a lorry, once I reach the A74(M), I  was making good time and only got slightly lost exiting the M6 to get on to the A66. 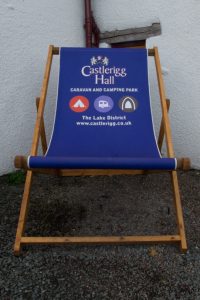 The site is outside of Keswick proper up quite a steep hill. The rain had started almost as soon as I got into the van and by the time I arrived about 13h00, it was fair chucking it down. I booked in, pulled the wet weather gear on and started to put the awning up. At this point I realised that when I booked, I had not intended to take the big awning so had quite a small pitch. But I shoehorned myself on and only got a little damp in the process.

The site is quite impressive with some of the pitches having really fantastic views over the lakes and hill and there it a well stocked shop with food, camping gear and souvineers. There was even a freezer so I treated myself to some frozen chips which cooked pretty well in the omnia oven alongside the fish.

Saturday dawned with the rain having gone off about midnight. After breakfast I pulled on my hiking boots and it was on to the main reason for the trip, climbing Skiddaw. The first part of the walk was on fairly flat ground so I made good time though the weather was very close and I was sweating a fair bit having regretted putting my windbreaker top on.

Hitting the base of the mountain I could see there was low cloud shrouding the summits however it was onwards and upwards. The climb at this point was steep and slowish going. Took a detour to bag the summit of Little Man before on to the main event of Skiddaw. On a good day there will be impressive views from the top but today it was in the clag. I did get a couple of photos but not much of an opportunity. 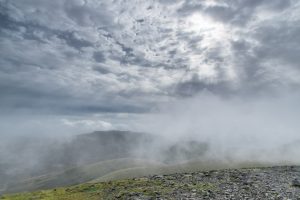 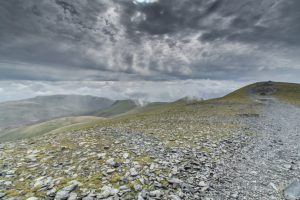 Never mind, I bagged the summit and started down. The trip down was almost a slow as going up as I was taking it easy on the knees. By this point it was late morning and more people were starting the ascent. The weather was also clearing as well. During the descent, there were a couple of Autogyros flying overhead. Very low down as well.

Instead of heading back to the campsite, I went into Keswick and wandered around the shops and market. Lunch was had amongst the bustle of the market and a t-shirt and hoodie were bought at a shop called Sheep-ish.

Back at the site, there was lashing of hot water for a shower then it was into the onsite gallery where photos shot by the owner over many years were available for sale. Picked up a winter photo over Keswick from Skiddaw for a bargain.

By late afternoon/early evening the weather was really nice and the awning had mostly dried out from the previous night. I went out as the sun was setting to catch the fading light. 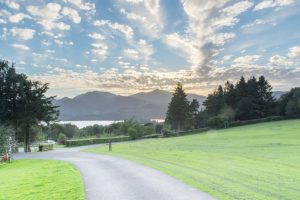 Sunday dawned with it having rained overnight so the awning was soaking again. Camp was broken in a relaxed fashion and it was on the road home about 8h30. It was a lovely weekend with a great walk and it is a site I’ll both visit again and heartily recommend.