For my third trip away in the van this year, it was off up the A9 to Pitlochry and some hopefully good walking. The weather wasn’t looking promising but that’s not something to stop the camping. And so, it was on to my usual pitstop then off on the 90-minute trip to the campsite. For some reason, right off the sat nav decided to take me a strange route from the bypass onto the M8. I didn’t really need the sat nav as it was a fairly straight road, and I was making good time till the end of the M90 when I got stuck behind a Land Rover pulling a trailer with a cow in it and doing only 30mph on the motorway. Then there was the expected traffic jam at the roundabout where the M90 meets the A9.

The weather so far had been bright sunshine, but it was clouding over and as I passed Birnam, there was a bit of a downpour. Pitlochry itself was dry and I was pitched up just after lunch, the new way of putting up the awning was paying dividends in less hassle.

The afternoon was on and off rain, so a visit to the dam’s visitor centre seemed ideal. It was quite small and seemed to focus more on the conservation efforts of SSE, the dam’s operators, than the operation of the dam itself. It did have a viewing platform that was pretty good for looking out over the river.

Just before dinner there was the amazing sight of two RAF Eurofighters at a very low level passing over the campsite. The noise was deafening.

The rain was heavier in the evening, so I settled down for some TV and reading. My new mini projector is working well as a way to watch TV in the van, the blinds being semi-silvered make a good screen. This weekend it was a bit of Rizzoli and Isles, a favorite cop show.

Saturday morning was bright with blue skies and looking not too bad for the planned walk. Overlooking Pitlochry is Ben Vrackie which is a popular walk from the town. The weather was not forecast to hold so I made sure I set off with the waterproofs in the backpack.

The first part of the ascent was up to Moulin and on pavement but from there it was onto a well-made path through some woods with wooden bridges added sympathetically to the route.

From the woods it was on to the moorland at the foot of the Ben and here the path was suffering from heavy rain eroding it badly. At one point it was almost like walking a ridge down the middle of the path. Part way across the moorland, the heavens opened, and I had to quickly pull on the waterproofs.

Over the moorland wasn’t too much of a climb and indeed was flat till Loch a’ Choire where the real climb started. It was a well-made path again, more like a staircase leading up the hill. As I climbed, it was getting windier and the summit was clearly being obscured by clouds. Coming up over the edge of the summit, the wind was very strong but was blowing the clouds across so there were moment where the view was impressive.

I didn’t tarry at the top as it was windy enough that I was getting blown about it a bit. So down the hill I went, the weather had improved a bit by now and there were more people heading of the top in more summer clothing. As I reached the woods again, I climbed out of the waterproofs and enjoyed the sun as it came through the trees.

Back at Moulin, there were signs for a ruined castle, Caisteal Dubh Mhaothlinne. This was a 14th century castle that was burned about 1512 due to fear of the plague. Since I was on my way down and had all day, I headed across the field to see the ruin. There wasn’t much left but made an interesting diversion. 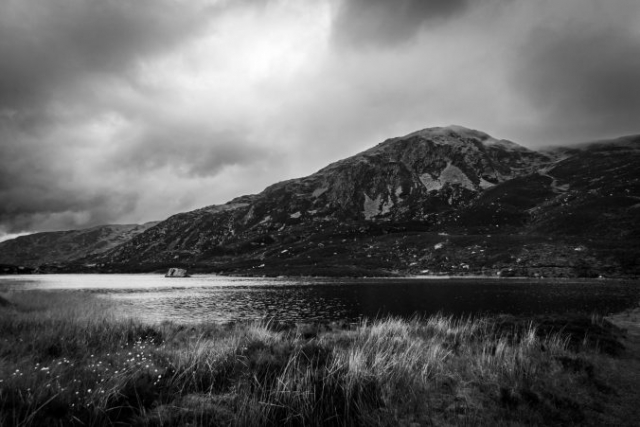 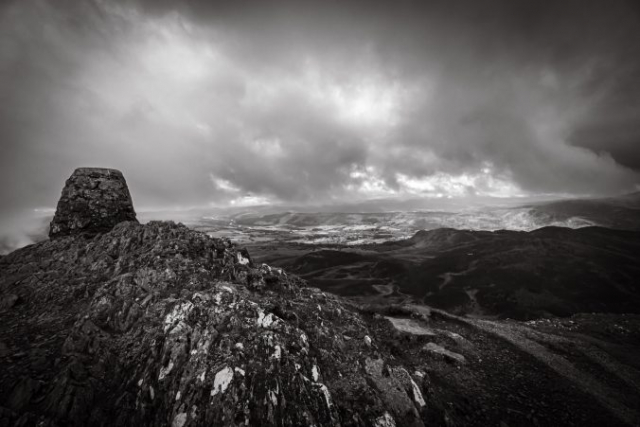 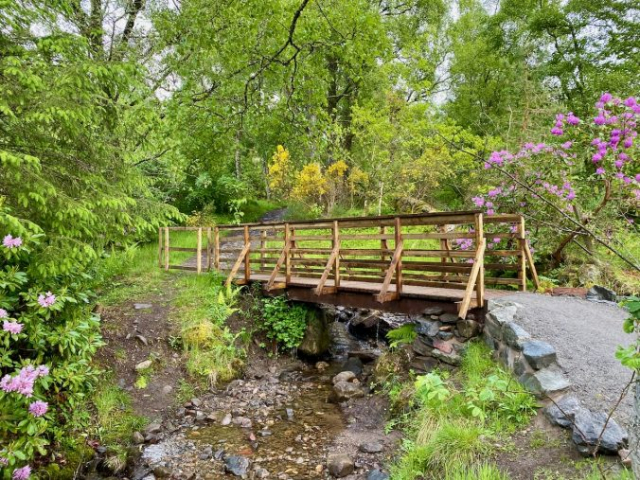 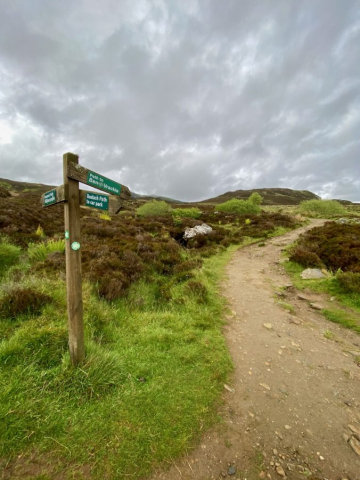 From the castle, it was back to the campsite and into a hot shower. The afternoon was spent catching up on some reading and watching the bands of weather roll over the campsite. The evening brought more tv to be watched and fingers crossed that the awning would stay dry.

Sadly, Sunday morning proved that to be a forlorn hope and the awning was soaking wet as I got up and had breakfast. Packing away was quickly done and then it was onto the road home. It was early on Sunday morning, the roads were clear, and it was a quick journey home. There looked to be a classic car convention happening somewhere near Perth as there were quite a few such cars on the M90 heading north.

This trip to Pitlochry was slightly better than the last one where the pitch flooded due to the rain. Weather in that part of the world is a bit hit and miss but with warm and waterproof clothing it doesn’t really matter. What I do need to do now is find a good way of drying the awning. Time for a trip to the DIY store to see if I can come up with a good solution.