First part of the summer holiday and it was off to the seaside. Whitby in this case. The van was packed the night before so it was a few clothes to be added then off via Sainsbury’s for food and the Asda at Dunbar for diesel. The price of fuel has dropped quite a bit recently so was pleasantly surprised at he cost for half a tank.

The road to Whitby was down the A1 with it’s fun alternating dual and single carriageways. As usual, the Sat Nav and I had a difference opinion as it wanted to take me via the Tyne tunnel and the A19 where as I wanted to stay on the A1(M) as far as possible. I won. The road wasn’t too bad though some of the ups and downs on the road approaching Whitby over the moors were fun and the last mile or so included a hill that I could only take in first gear.

Checked in and found my sea view pitch. This is the first site I’ve stayed on with grass pitches. Electrics hooked up it was time to put the awning up. As suggested by a friend, I pegged the windward side down loosely first before putting the poles in. This made all the difference and it was up in about 1/2 an hour. 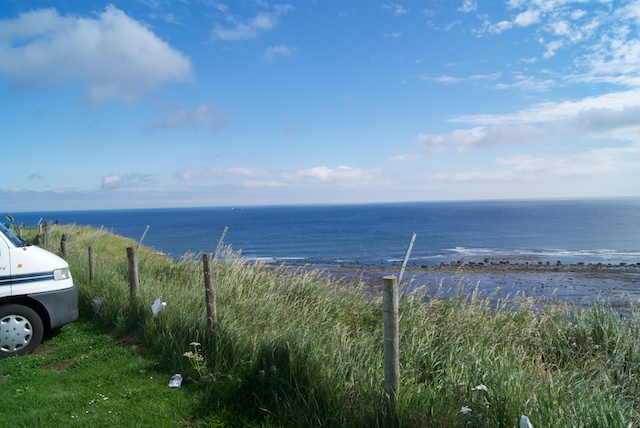 I settled down to read for a while and then it was fish and potatoes for dinner, this time actually cooked.

The dish washing area isn’t bad though there was the usual forgetting of washing something.  After the dishes were done, Dr Who (pirate planet) was watched and then down to bed for the evening.

Day two of the holiday dawned with bright blue skies despite rain overnight. First task of the day was a shower. The toilet block a Whitby holiday park is pretty well appointed but strangely missing the stools you get in the showers of the Caravan Club or Camping and Caravan Club so there is nowhere to put your clothes. Also, unusually, they started cleaning the block at about 9am. Breakfast was eaten and the day being so nice, it was time to head into Whitby proper.

First stop was the abbey. Pretty impressive place and English Heritage had done a good job both preserving the ruins and providing a visitor centre that was illuminating. Many photos were taken. 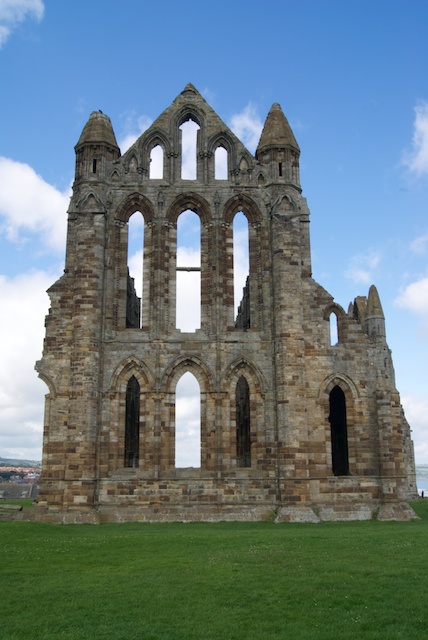 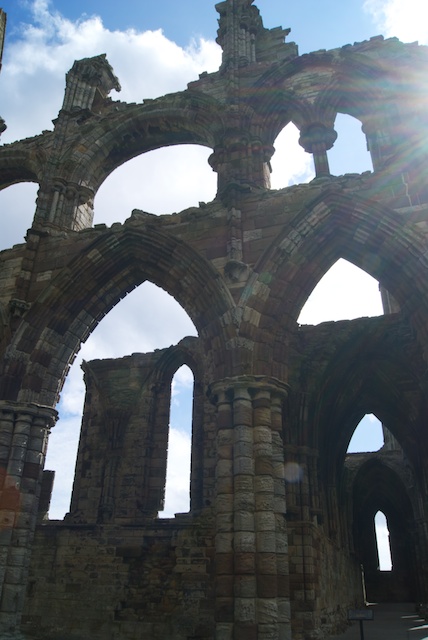 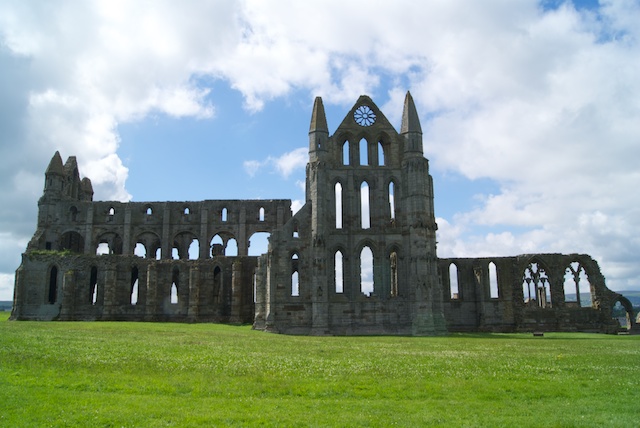 Next it was down a steep slope into the harbour area. I’ve never seen a concentration of fish and chip shops like it. Loads of them and plenty of seagulls waiting to take their pick as well.

After hitting the visitor centre and picking up a map it was time to try the Dracula Experience. Bram Stoker had an association with the town and part of the story is set here. For most of it, it was your average ghost house type thing. But just at the end there was a guy in a werewolf suit and he gave me the fright of my life. So £2 well spent. Next up was the Lifeboat museum. The heroism on display was touching. It was amazing to see the stories of people who put their lives on the line to save others. But it is the price we pay as an island nation.

Lunch was eaten overlooking the harbour. With a hungry seagull overlooking me. Kept my sandwich though and headed for a wander through town.

Last was Captain Cook museum. He had quite an association with the town and some of his famous ships were built here. He museum was small but told his story.

Back to the van for a snooze then dinner, Dr Who and bed. Day stayed nice throughout though he wind was threatening the awning.

Second full day in Whitby dawned a bit overcast but no rain overnight. The wind had died down during the night as well. Up breakfasted and showered, the plan was for an easy day. Started with a walk into town to get some supplies and then back to do some washing. First attempt at the laundry was aborted when I broke the machine. No idea what I did but it was not accepting money. Waited for a bit then got the load on and dried. Most of the day was spent reading the papers. The nice part about being away is that time is available to read and digest the news and with the Barclay’s thing going on, there was something to digest.

Also on the reading list was Surface Detail by Iain M Banks. I had read it before but it would be my favourite of the Sci Fi Culture novels.

The day passes slowly in a relaxing and unhurried way. Dinner was had and an episode from Season 2 of Sherlock was watched. Then just before bed, I was rewarded with the most fantastic sunset. A bright red-orange sun, setting over the headland.