Took a half day Friday from work for the first weekend away in the season. I’ve been wanting to try this idea of taking a half day holiday to get a full weekend away.

So loaded the van and headed off. First stop was for fuel. And here it went a little off the rails. I managed to splash myself with diesel. Trousers and shoes covered. Luckily the petrol station was close to home so back for a quick change and then a restart.

I had a reasonably clear idea of the route to the campsite and thus the sat nav and I had a difference of opinion at a couple of points during the journey. I won and got to Glencoe in about 3 hours. The trip was pretty uneventful apart from the usual set of suicidal drivers and bikers. Some spectacularly bad overtaking manoeuvres were witnessed but reaching the A82 brought forth some of the most spectacular scenery I’ve ever seen. It truly heals the soul to see such wild beauty. The A82 passes to the south of Rannoch Moor which is something I’ve wanted to see for a while.

Signed in and pitched up. The first test of the holiday was to get the awning up. This was less hassle than anticipated and in about an hour after arriving I was starting to cook dinner.

Dinner was potatoes and chicken, with the chicken cooked in the Omnia oven. I’ve said it before but this is a fantastic device that lets you oven cook on a hob. And dinner was extra tasty in the fantastic surroundings of the campsite.

The campsite itself is easily up to the best of Camping And Caravan Club standards. Lots of hot water in the dish washing area and loos and everything was spotless.

The temperature dropped with the setting sun so the oil filled radiator was put on and set to take the chill off the air. Early bed as I wanted to get an early start on the main endeavour for the weekend, the Pap of Glencoe. 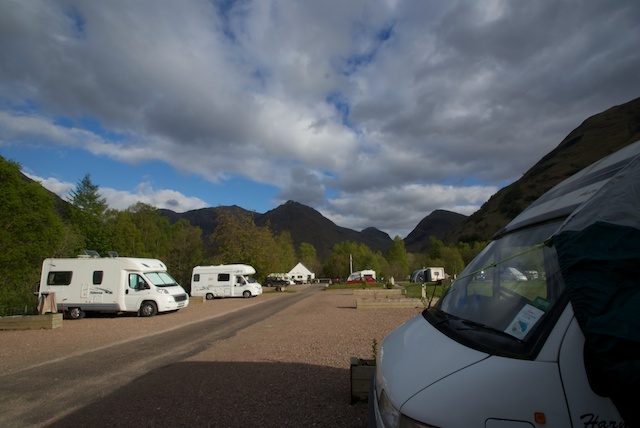